The copper plumbing lines in the house we bought last year have started to develop pin-hole leaks. Many of the solder joints are discolored. I thought copper was the best you could do for plumbing. So what's the problem here and how should we deal with it?

Copper is indeed the gold standard for plumbing -- or at least it used to be.

Copper is relatively easy to work with. And copper doesn't rust, unlike galvanized steel pipe, which you'll still find in some older homes.

That made copper the first choice for residential plumbing systems for many years. In its day, copper was even used for drain and waste lines -- a category now the domain of PVC pipe.

But copper isn't perfect. Besides being more expensive to buy and more time-consuming to install than some of its competitors, copper can be damaged by several common conditions in water and soil.

And as a result, newer forms of plastic pipe are gaining popularity among both do-it-yourselfers and plumbers.

Have the water tested for pH

Low pH in water from a private well is one condition that will lead to the problems you describe. Water is neutral when the pH is 7. Anything above that means the water is alkaline; values below 7 mean the water is acidic. (As a point of reference, a lemon has a pH of about 2.5.)

An acceptable range for pH is between 6.5 and 8.5. When the value falls below 6.5, it becomes acidic, and this acid can begin to affect copper pipe. The water will pit the inside walls of the pipe and leach out copper and any lead contained in the soldered joints (lead is now banned in solder used in potable water systems). 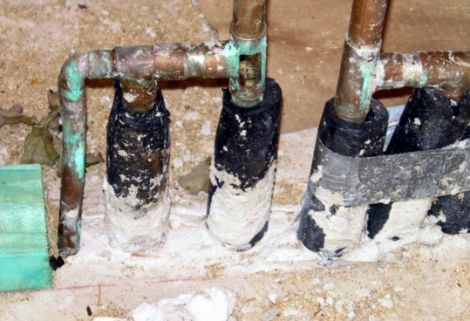 Characteristic blue-green stains around solder joints that have started to fail are one giveaway. Leaking pipes can create expensive headaches when, for instance, they're in places like the exchanger inside your boiler.

Have the water tested by a reputable lab in your area. If tests find low pH is the problem, there are a variety of water treatment options open to you. You may also find iron and manganese in the water, separate problems that can be treated at the same time.

Low pH can be cured by adding a neutralizer to the water, such as soda ash or potassium carbonate. You may be able to rent the equipment instead of plopping down a couple thousand bucks to buy it outright.

Use thicker copper or switch to plastic

After you've got your water under control and you begin to replace damaged supply lines you can always switch to a heavier gauge of copper. Copper tubing comes in both hard and soft versions and in a range of weights.

For residential systems, types K, L and M all can be used. K is the heaviest, M the lightest. Type K has a wall thickness of 0.049 in., almost twice that of Type M. You'll pay proportionately more for type L or K but the added expense might be worth it.

Or you could just switch to plastic pipe.

Many of us will recoil in horror at the idea. Remember the economy PVC pipe we purchased years ago as young homeowners trying to save a few bucks? It seemed to shatter easily in cold weather and droop when the water got hot.

But polybutylene also failed in a lot of homes, possibly because it reacted poorly with chlorine in public water supplies. It's no longer on the market.

PEX and PVC both durable options

Modern plastics are a lot better. Low pH isn't going to damage polyvinyl chrloride (PVC) or cross-linked polyethylene (PEX) pipe so it may be a good option if you're concerned about that or any of the other conditions that adversely affect copper.

PVC pipe is installed much like copper. Straight runs of tubing are joined to T's, elbows and other fittings with cement. It's easy to work with.

PEX is a newer material that's used in radiant-floor heating systems as well as potable water supplies. It's a very tough plastic that comes in big rolls and is joined with special tools that make a crimped connection. Long runs of tubing can be made without any fittings, reducing the chances of a leak.

PEX has to be well supported; otherwise it will sag. But its durability and the ease of installing it have convinced many plumbers to make the switch.

And it can be connected to copper, meaning your system can be upgraded one leg at a time.