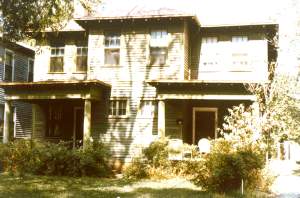 This early 20th century frame house, built as one of many buildings in aneighborhood of mostly single family dwellings, makes it somewhat unusual. The twin-porchis its most distinctive feature, contributing both historically and architecturally to thecharacter of the house.

To try to remedy water accumulation at the front steps, the ownerconnected the two porches with a new, eight-foot section. This resulted in a long,continuous porch--a horizontal design it did not have before work when the twin porchesprovided separate entrances for the duplex. In addition, the projecting center portion ofthe duplex is now completely obscured. Because this inappropriately altered the building'sexterior appearance, the work did not meet Standard 2. 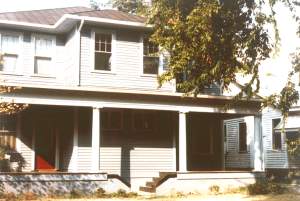 After work, one long porch and a new look.

Porches are a typical and often dominant feature on the facades of manyresidential buildings, yet represent that portion of a building that is often subjected tochange. The size of the porch, its architectural style, the ornateness or simplicity ofdetailing, the sense of openness, and features such as columns or balustrades are allimportant attributes. Traditionally, porch roofs were pitched away from the steps and thebuilding in order to shed water properly. Rather than alter the historic roof design, abetter choice would have been to repair the porch and add gutters and downspouts, asnecessary, to correct the water problem.