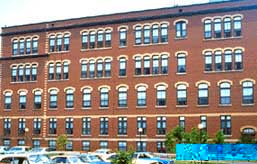 Technology and prevailing architectural styles have shaped the history of windows in the United States starting in the 17th century with wooden casement windows with tiny glass panes seated in lead cames.

From the transitional single-hung sash in the early 1700s to the true double-hung sash later in the same century, these early wooden windows were characterized by the small panes, wide muntins, and the way in which decorative trim was used on both the exterior and interior of the window. 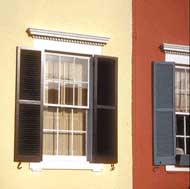 As the sash thickness increased by the turn of the century, muntins took on a thinner appearance as they narrowed in width but increased in thickness according to the size of the window and design practices. Regional traditions continued to have an impact on the prevailing window design, such as with the long-term use of "French windows" in areas of the deep South.

Changes in technology led to the possibility of larger glass panes so that by the mid-19th century, two-over-two lights were common; the manufacturing of plate glass in the United States allowed for dramatic use of large sheets of glass in commercial and office buildings by the late 19th century.

With mass-produced windows, mail order distribution, and changing architectural styles, it was possible to obtain a wide range of window designs and light patterns in sash.

Popular versions of Arts and Crafts houses constructed in the early 20th century frequently used smaller lights in the upper sash, set in groups or pairs; and saw the re-emergence of casement windows.

In the early 20th century, the desire for fireproof building construction in dense urban areas contributed to the growth of a thriving steel window industry along with a market for hollow metal and metal clad wooden windows 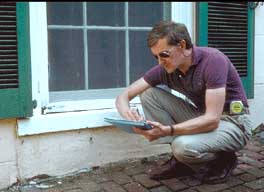 Identify, retain, and preserve windows--and their functional and decorative features--that are important in defining the overall historic character of the building.

Such features can include frames, sash, muntins, glazing, sills, heads, hoodmolds, panelled or decorated jambs and moldings, and interior and exterior shutters and blinds.

Conduct an indepth survey of the conditions of existing windows early in rehabilitation planning so that repair and upgrading methods and possible replacement options can be fully explored. 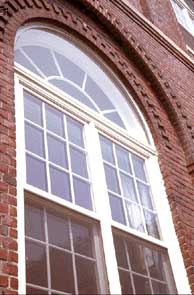 Protect and maintain the wood and architectural metal which comprise the window frame, sash, muntins, and surrounds through appropriate surface treatments such as cleaning, rust removal, limited paint removal, and re-application of protective coating systems.

Evaluating the overall condition of materials to determine whether more than protection and maintenance are required, i.e. if repairs to windows and window features will be required.

Failing to provide adequate protection of materials on a cyclical basis so that deterioration of the window results.

Retrofitting or replacing windows rather than maintaining the sash, frame, and glazing.

Failing to undertake adequate measures to assure the protection of historic windows. 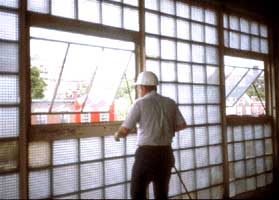 At right, a worker is preparing steel windows for repairs and refinishing.

Such repair may also include replacement in kind--or with compatible substitute material--of those parts that are either extensively deteriorated or are missing when there are surviving prototypes such as architraves, hoodmolds, sash, sills, and interior or exterior shutters and blinds. 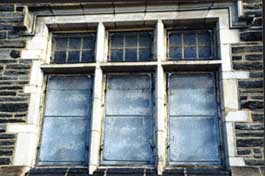 Replacing in kind an entire window that is too deteriorated to repair using the same sash and pane configuration and other design details.

If using the same kind of material is not technically or economically feasible when replacing windows deteriorated beyond repair, then a compatible substitute material may be considered.

The photo shows a deteriorated lower window sash shown prior to its replacement in kind. 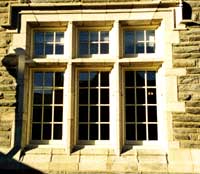 For example, on certain types of large buildings, particularly high-rises, aluminum windows may be a suitable replacement for historic wooden sash provided wooden replacement are not practical and the design detail of the historic windows can be matched. The lower window sash in the picture on the left has been replaced, based on physical documentation.

Also recommended are historic color duplication, custom contour panning, incorporation of either an integral muntin or 5/8" deep trapezoidal exterior muntin grids, where applicable, retention of the same glass to frame ratio, matching of the historic reveal, and duplication of the frame width, depth, and such existing decorative details as arched tops should all be components in aluminum replacements for use on historic buildings.

Design and install new windows when the historic windows (frames, sash and glazing) are completely missing. The replacement windows may be an accurate restoration using historical, pictorial, and physical documentation; or be a new design that is compatible with the window openings and the historic character of the building.

Optional Step 6: Alternations/Additions for new use

Designing and installing additional windows on rear or other-non character-defining elevations if required by the new use. New window openings may also be cut into exposed party walls. Such design should be compatible with the overall design of the building, but not duplicate the fenestration pattern and detailing of a character-defining elevation.

Providing a setback in the design of dropped ceilings when they are required for the new use to allow for the full height of the window openings. 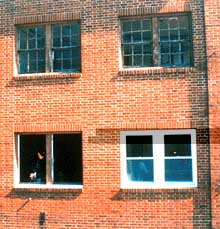