We own a home that is constructed of squared logs supposedly built around 1800. The ends of some of the logs are getting some rot. Is there a wood preservative or other appropriate treatment to keep the exposed logs from getting worse?

Inspecting old buildings throughout the Delaware Valley has given me the opportunity to see a variety of log buildings. The earliest were built closest to the Delaware Bay by Swedish and Finnish settlers as early as 1638. I've been in a couple Welsh built log homes from the late 17th century and early 18th century. Later 18th century and early 19th century log homes near my house were built primarily by German and Swiss settlers.

In my area, these 17th, 18th and early 19th century log buildings were obviously built as permanent dwellings, not like the rustic, primitive "log cabins" more common to later western frontier settlements. The logs were usually hewn square and the corners were joined in a method that didn't require the logs to extend unprotected beyond the building. 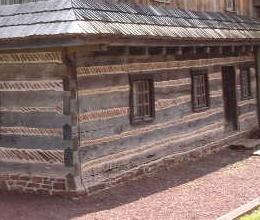 In my experience, and according to various primary sources, most of these surviving log homes were well protected against the weather from a very early stage. The logs were originally covered. "Weather boards", installed horizontally or vertically, were a common way that these log homes were clad to provide protection. Another method was to apply "render" which is basically what is called stucco today. The simplest method to offer some protection was to apply limewash although this required frequent re-application. 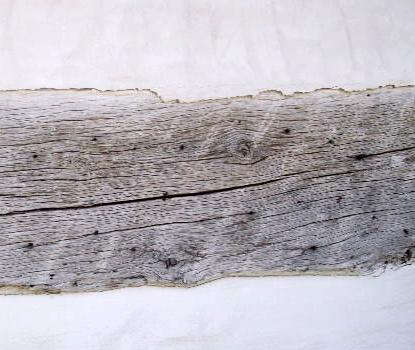 An early 19th century log home showing the outline and nail-
holes of the diagonal lath for the application of render (stucco).

In recent times, it's quite common for the exterior coverings to be removed after discovering a building's log construction. To the people that originally built these homes, I'd guess that it would appear like the homes lost their clothes. It would be a similar reaction to what we would have, looking at a newer frame building without any siding or veneer. Although I often try to encourage folks to preserve or return the original character of their historic homes, I don't think I could bring myself to cover up exposed logs. They're just way too cool. I find that typically, the longer the logs have been exposed, the more extensive the damage and deterioration.

An exposed log house dweller needs to vigilantly defend against water and insects. This includes the chinking between the logs. Any voids should be filled. If there are any log edges that create a protruding "shelf", the chinking should be extended to the edge of the logs or beveled to shed water. Any sections of damaged wood should be replaced. The end grain of the logs is the most susceptible to damage. Vegetation in contact with the walls and soil contacting the bottom logs can also cause rot and invite insects.

Most exposed exterior wood is protected by a film of paint. To keep natural wood exposed but protected, boiled linseed oil can be used. It's basically oil-based paint without the pigment. Just be sure to follow the safety instructions. Linseed oil can spontaneously ignite. The other minus is that the wood will likely darken over time.

A solution of borate (disodium octaborate tetrahydrate, not boric acid), applied liberally to the logs after being dampened, offers good protection against wood-destroying organisms and insects. After application, a water repellent sealer should also be applied as borate will wash out in the rain. 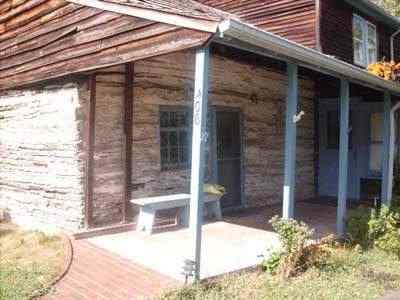