Purchasing and Installing A Smoke Detector

When shopping for a smoke detector, consider these suggestions:

Where Should I Install Smoke Detectors?

Where you place smoke detectors depends on the size and layout of yourhome, and where people sleep in your home. Since the primary job of asmoke detector is to awaken sleeping persons and warn them of urgentdanger, put your detector as close as possible to the bedrooms orother places where people frequently sleep. If two sleeping areas areseparated, each should have its own detector. The hallway next to thebedrooms or other sleeping areas should be a priority location fordetectors.

If bedroom doors are normally closed at night, detectorlocations within each bedroom might be considered, particularly ifthe occupant smokes in bed. Closed doors usually offer someprotection against both fire and smoke from outside the room.However, they may make it more difficult to hear a detector alarmoutside the bedroom. More significantly, they can keep smoke producedby a fire in a bedroom from reaching a detector in the hall.

Insingle floor homes, the detector should be placed in the hallway nearthe bedrooms. In a house where the bedrooms are upstairs, onedetector should be near the top of the stairs to the bedroom area.The simplest rule for locating one smoke detector in your home shouldbe "between the bedrooms and the rest of the house, but closer to thebedrooms." If you are installing multiple detectors, put one neareach sleeping area. It is also a good idea to make certain there isone on each level of the house. The basement ceiling, near the stepsto the rest of the house, is another good location.

Don't putdetectors within six inches of where walls and ceilings meet, or nearheating and cooling ducts. Detectors located in these areas may notreceive the flow of smoke required to activate the alarm. 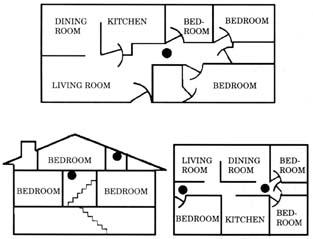 How to Take Care of Your Smoke Detector

Smoke detectors don't need much attention. Regular testing and promptreplacement of batteries or bulbs is generally all that is needed.However, if you neglect these few requirements, your detector won'tdo its job if a fire starts.

At least once every month, test your detector by holding a candle sixinches under it. If you're testing an ionization detector, let theflame burn. To test a photoelectric unit, extinguish the candle andlet visible smoke drift into the detector. Heavy tobacco smoke alsowill work. The unit's alarm should begin to sound within twentyseconds. To stop the alarm, fan the smoke away from the detector.Soon the detector will become silent, and you can walk away knowingit's still on guard.

Using real smoke is more dependable thanpressing the "test" button found on many older smoke detectors. Insome older units, the button only starts the warning sound, and doesnot tell you whether the detector circuit itself is working. Somenewer detectors have more refined test systems that simulate thepresence of smoke in the chamber. These don't need to be tested withreal smoke. Check the package or instructions of your detector to seeif it has this feature.

Some authorities suggest testing every twoweeks. This should not reduce battery life significantly. Testingmore often than this may shorten your battery's life.

Replace Batteries and Lamps At Once

Batteries will last approximately one year. If your battery-powereddetector begins to emit its low-power warning sound, remove the weakbattery and replace it immediately with a fresh one. Have a newbattery on hand always.

Replacement lamps for photoelectric detectorsalso should be kept on hand so no delay occurs in restoring theirfunction. Owner neglect of testing and part replacement has been acause of smoke detector failure, often resulting in tragedy.

The detector is not a toy. Remind everyone in your family that itshould not be operated, or even touched, except to test, maintain,and clean. Some authorities suggest using the detector test featureto operate the alarm as part of a family "fire drill" on occasion.Operating the alarm excessively draws heavily on battery power, andmay cause a malfunction when it's needed most.

Do not respond to "nuisance" alarms (cooking, fireplaces, etc.) bydisconnecting the battery. Either fan away the smoke or relocate thedetector.

Most manufacturers back their detectors with a service or replacementwarranty. If your detector begins to malfunction during the warrantyperiod, follow the warranty procedure listed in the use and careliterature. In some instances you can return the unit to the storefrom which it was bought. You may be instructed to send the unitdirectly to the manufacturer.

Protect Your Family From Fire

Acknowledgments to Michelle L.Wallingford for her contributions tothis publication.