Well it looks like we are giving in. Our contractor worked all day on this beautiful radiator. We were all disheartened. What's our next step? Have any ideas? As you can see this is a beautiful piece of furniture/art my husband worked very hard on to restore. 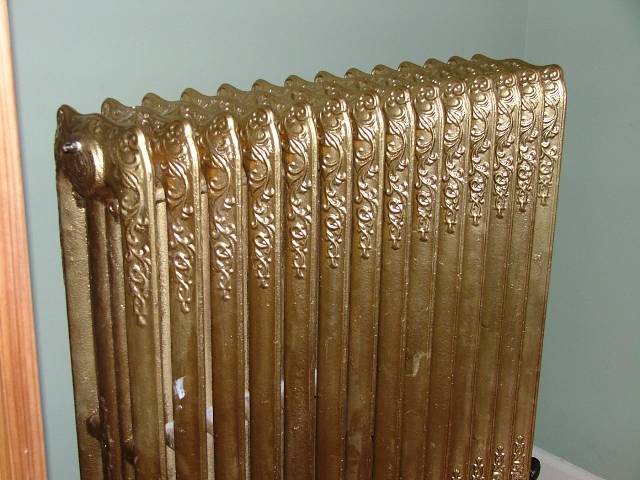 We are back with our friends from Washington, D.C., whose heroic efforts to repair a leaking cast iron radiator have apparently come to naught.

A slow leak in one radiator had been all that stood in the way of turning on the heat after a two-year renovation. They had a plumber willing to try just about anything, and wondered what approach had the best chance of success. I suggested a two-part epoxy called JB Weld that can be used to repair metal and would easily tolerate the 180-degree temperatures of a hot-water heating system. It was worth a shot. But the repair did not hold. It might have been the difficulty of prepping the area correctly, or the hole or crack may have been more extensive than it appeared.

In any case, the couple was throwing in the towel and pursing another option: an outright replacement.

It turns out there's a brisk market in vintage cast iron radiators, especially in large metropolitan areas on the East Coast where these fixtures are still common. But if you buy a totally refurbished, pressure-tested radiator in an ornate Victorian style (as this one appears to be) be prepared to spend some money.

Suppliers want potential customers to narrow down the options, first with the number of sections or fins; then the number of vertical tubes, called columns; and finally the overall dimensions of the existing radiator. Whether it's a steam radiator (typically supplied by one pipe) or a two-pipe hot water radiator is another basic question.

Dimensions and other design features determine how much surface area the radiator has, and consequently how much heat the radiator generates. Dealers can help match the heat output of a replacement radiator even when it's of a different style.

It's probably a good first step, though, to ask a plumber for a new calculation of the heating load in that room before ordering. It wouldn't be unusual for the original radiator to be oversized. Ugrading insulation or installing better windows also can lower the demand for heat and allow a smaller (and less expensive) replacement.

The detailed floral patterns cast into ornamental radiators of the Victorian age certainly add to their appeal, and no doubt to the cost of replacing one. One company I contacted, Shafter Bros. Inc. of Montreal (oldcastironradiators.com; 800-361-1778), had a number of possible replacements in stock, including one of roughly the same dimensions. Costs ranged up to about $1,800, and shipping the 610-lb. radiator was another $265.

Newspaper classifieds, craigslist, architectural salvage yards, and even community recycling centers are other options, no doubt at lower costs. One advantage of buying from a dealer, however, is that the radiator has been thoroughly checked for problems, probably not the case with many of the alternatives. A good starting point is our Supplier Directory.

The high cost of replacing a decorative radiator is one reason a repair is worth the effort. Better to have tried than automatically reaching for a checkbook.