I'm in the middle of what has turned out to be a big remodeling job, which will include the relocation of a few cast iron radiators. What's involved? And is there another source of information that might help? 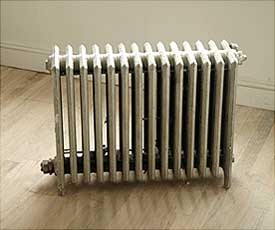 We've had to move cast iron radiators more than once to clear the way for renovations and repairs. My rule of thumb is not to tinker with mechanical systems I don't know how to fix, and that includes heating systems. You may be more of a just-go-for-it sort of person, but I called our plumber.

Our cast iron radiators were connected to a hot-water boiler (rather than a steam system). Each radiator had a water inlet and an outlet. The water in the system ran through a closed circuit which was interrupted periodically by a radiator. In that respect, the cast iron radiators we had were no different than the fin tube baseboard that's the norm in hydronic systems installed today.

To move a radiator, the plumber drained hot water in the lines, cut the steel pipe running to and from the radiator and muscled the radiator out of the way. You may need help with that part -- they're very heavy. Later, the radiator was moved back in place, the hot-water lines reconnected and the heating system brought back on line.

Steam radiators are a little different. They can be served by a single line which delivers steam and then collects the water once it has cooled and condensed inside the radiator.

In our case, the whole process took a couple of hours. During that time the zone on which the radiator was located could not be used. In an old house, that might mean a disruption of heat to the entire house, making this a good warm-weather job.

Now's the time to refurbish

As long as you've got the radiator out, consider getting it refurbished. Many of these lovely pieces of decorative iron are disguised by layers of grime and paint. Old, chipped paint is not only an eyesore but it also reduces the heating efficiency of the radiator.

Depending on the type of radiator you have, it might be a do-it-yourself project. Those that are held together with threaded rods are easier to take apart than those assembled with concealed, threaded nipples. After removing the rods, you can separate the sections with a wedge and hammer to work on them.

Or you can hunt up a company that specializes in this work -- a place like LT Design and Innovations in Somerville, Mass (www.allaboutradiators.com). Charging an average of $20 per fin, or section, the company can remove the radiator and take it to its shop. There, the radiator is disassembled, sand-blasted and powder-coated.

If you want to re-paint it yourself, get a testing kit first and check to see whether you're dealing with lead paint. If so, you'll have to take care that the stripping process does not expose you or your family to airborne lead. If the paint is lead-free, a wire wheel mounted in a drill (and used outside) should take care of the old paint. If you repaint yourself, make sure you use one designed for high temperatures.

It's also possible your house is better insulated now than it was when the radiators were originally installed. If it's cranking out too much heat, you (or a shop or plumber) may be able to remove one or more sections to reduce its output. Once again, radiators assembled with threaded rods represent the best chance for success.

Whether you refurbish, rebuild or just plain move a radiator, its weight may turn out to be one of your biggest obstacles. Mind your back and consider renting a hand truck. Cast iron radiators can easily tip the scales at several hundred pounds.

Got a question? You can contact me at scottgibson@securespeed.us.