I'm posing this question on behalf of a friend. She lives in a rental house with wooden floors that have been neglected for years. Her dog threw up on the wood, which is quite porous. The liquid has stained the wood and the odor clings stubbornly. Do you have any suggestions on what might remove the odor? 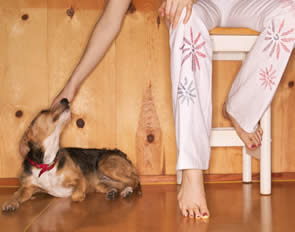 Assuming your friend hasn't considered moving out, she really has two dilemmas: how to rid her house of an unpleasant smell, and how to prevent the same thing from happening the next time Fido has a queasy stomach.

She could do nothing. Even the most noxious smells seem to dissipate in time. In an old house we owned for a number of years, an animal seemed to die in our bedroom wall every winter. We assumed it was a mouse or a squirrel. It was always the same wall.

The unmistakable odor seemed to take about six weeks to pass through its entire cycle, from faintly ominous to awful and then, finally, undetectable.

It's hard to get at a problem like that when the source is entombed in the wall. But at least this problem is out in the open and therefore easier to attack.

Try a low-tech neutralizer first. There are lots of products on the market sold as pet odor neutralizers. A pet store or your friend's vet might be able to recommend one.

These compounds are sometimes described as enzyme-containing neutralizers which contain bacteria and enzymes that digest the odor-causing proteins that Fido's upset stomach left behind.

But you might also try a home-grown solution first. My research led me to the suggestion that alternating treatment with acidic and alkaline compounds can be very effective. Start by sprinkling baking soda, which is mildly alkaline, over the area and let it stand overnight. Vacuum or sweep that up the next day. Then scrub the area with a strong solution of vinegar and water--two cups of white vinegar in one gallon of water. That's the acid. Both vinegar and baking soda are benign as well as inexpensive, so there's no real downside to this experiment.

If that's unsuccessful, try going the route of the commercial neutralizer. Last on my list would be calling a commercial cleaning company and asking for help.

Wood floors should be sealed. The second problem will be harder to solve. Floor finishes seal the wood so water, food and all the other hazards of life won't leave permanent stains. In time, they are worn away and the floor needs re-finishing.

It's entirely possible the stain is permanent. Still, it might be worth trying to blend the stained area with the rest of the floor. A mild solution of oxalic acid and water will lighten wood. A diluted wood stain might camouflage the area if it's too light.

If your friend doesn't want to risk making the problem worse, she might consult a pro--either a professional floor finisher or a woodworker who specializes in finishes.

In the end, this is an issue that rightfully involves the owner of the house. Landlords are often understandably wary of tenants who own pets. At the same time, to neglect routine floor maintenance is to invite just this kind of result.

Sanding and refinishing floors isn't inexpensive. But if the house were in otherwise good condition, the landlord would be acting in his or her own best interests by taking care of it. If the house is a wreck and the landlord uninterested, your friend could simply clean up the mess as best she could and not worry too much about the rest.