Can you repair gaps in a chimney liner without having to replace it? A chimney cleaning at my 1959 ranch is turning into a $3,000 job. The chimney sweep showed me pictures of what looked a seam between sections of the liner. There seemed to be some deterioration on one of the four sides. According to him, the liner needed to be replaced at a cost of more than $3,000. He didn't present any alternatives but it seems like a major expense to repair a brick-sized gap with some mortar. 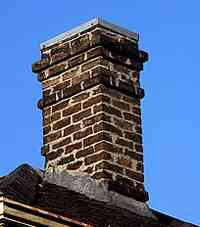 That does seem steep for repairs to such a small area, but only until you consider what the problem suggests about the rest of the chimney.

The tile liner of your chimney is keeping you safe. It prevents combustion gases from seeping through any gaps in the block or brick chimney and into your house. In the event of a chimney fire, the liner will help prevent your house from burning down.

Your chimney sweep was doing you a favor by alerting you. If there's a gap between tile sections in one area, there may also be weaknesses elsewhere. The liner is something you want in good repair.

However, I would be suspicious when he tells you there are no alternatives because there are.

A new liner can replace the tile.

Let's assume for the moment the existing liner is shot. It's possible to replace the old tile with new tile, but it's more typical to use a stainless steel liner. Liners are available in both rigid and flexible versions.

A stainless-steel liner runs from top to bottom, safely sealing the chimney. It can be insulated, which will help the chimney draw better and reduce the deposits on the inside of the chimney.

When you have a short, straight chimney, the rigid liner will work nicely. If you've got an old place with lots of bends in the chimney, use a flexible liner.

There also is a process called Supaflu (you can read more about it at the company's web site, www.supaflu.com). It's not really a liner but rather a method of casing a liner with a proprietary mortar.

After the existing liner has been knocked out, your local Supaflu dealer inserts an inflatable bladder into the chimney and pours a mortar-like grout into the space between the bladder and the walls of the chimney.

The soupy mix fills cracks and voids in the walls of the chimney. Once the mortar has cured, the bladder is removed.

Get a second opinion.

Either of those options could set you back $3,000, and the bid your chimney sweep gave you may in fact be the going rate for that kind of work.

Then again, you'd be smart to call a chimney repair company and get another bid. If there's a Supaflu franchise in your area, I'm sure someone there would be happy to give you a price. At least you'd have more information available before making a decision. If you do end up spending $3,000 to get this problem fixed, you'll know for sure that there isn't any other way out of it.