The enclosure around our bathtub is finished in tile. At the bottom of the wall, where the tile meets the tub, the grout has turned a nasty dark color. There's also a small soft area on one wall. Is a grout cleaner -- or even some bleach -- the answer here? Or are more drastic measures called for?

Experience and Murphy's Law suggest that any building problem involving water turns into a worst-case scenario in less time than it takes to say, "Hey, what's all that wet wood doing in there?"

Discolored grout usually means there's a leak that has given mold a favorable growing environment.

But a soft area suggests that whatever the tile was set on is deteriorating. It's no longer structurally sound.

Start at the bottom of the wall

More than likely you'll have to replace at least a row or two of tile at the base of the wall. So start there and work your way up. Always tear out all the bad stuff before replacing it with anything new. 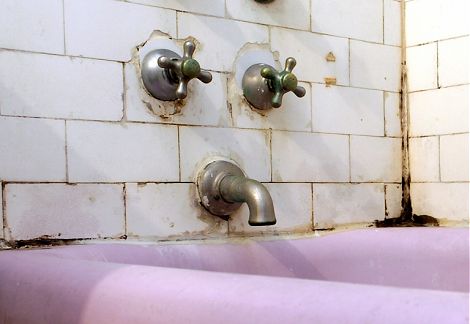 Most tile installers these days use cement backer board or a similar product as the base for tile. These materials are unaffected by water.

Behind the backer board is a layer of tarpaper that protects the wood framing. Tarpaper is applied horizontally with an overlap of 6 in.

There's always the chance that damage will be limited to the first row or two where water has wicked up behind the tile and damaged an under-protected wall. After digging out anything that's wet, the wall can be rebuilt.

Matching tile exactly will be tough. But if you choose a contrasting color or pattern of tile, the repair may even look like it was designed that way from the start.

If it's gypsum drywall, tear it all out

The damage you find will probably be more extensive than the backing behind a row or two of tile. As you start your explorations you may find that gypsum drywall was used as the tile substrate.

This is never a good idea for a shower surround. Even water-resistant drywall (what used to be called green board) should never be used where it will be regularly splashed with water - as in a shower.

If that's what you've got you are better off tearing out the entire tile surround and starting fresh, even if it looks OK now. It's going to fail sooner or later. Pull out all tile, and all the wallboard, right back to the studs. Check for any damage to the framing and replace that, too, if it's mushy.

Kill any mold you find with a solution of 1 cup of bleach to a gallon of water, but if mold is extensive consider replacing the framing or calling a professional. Allow the wood to dry thoroughly before covering any of it up.

Then rebuild the surround so the same problem won't come back to haunt you.

The tub may have a short lip around its upper edge. If so, lap the tarpaper over it so any water making its way through the tile or grout and the cement board won't get inside the wall.

Nail or screw the backer board to the framing and reinforce seams with fiberglass mesh tape and latex-modified thinset adhesive.

Then set the tile with the same thinset and use grout that contains a latex additive. At the bottom of the wall, leave a gap of 1/8 in. or so between tub and tile and fill that with silicone caulk.

If you're a non-pro like me, the job will be messy and time-consuming. But you'll feel better knowing that you now have a tile installation that won't leak.