I've decided to remodel our kitchen--something my wife has been waiting 26 years to see. After removing two layers of flooring, I found two major problems. First, the foundation is old stone which has apparently never been mortared. Second, some of the main support beams in the frame seem to have been attacked by powder post beetles and are rotten in many areas. If that's not enough, some pegged joints seem to be coming apart. I don't see how to jack the house to repair these problems, and I'm afraid the walls will cave in if it's not done correctly. 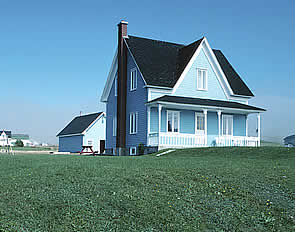 It's discouraging, I know. When my wife and I were in our 20s we bought an old farmhouse whose ell had very similar problems. Our hearts sank. Using a dozen borrowed house jacks, we lifted the ell off its crumbling foundation and cut off the bottom 4 feet of wall with a chainsaw. We rebuilt the lower walls and set the ell back down on a new block foundation. I was lucky the thing didn't fall on my head.

It can be fixed, if you know what you're doing

What you describe isn't unusual for an old farmhouse and the damage can be reversed. But go slowly. Jacking up a building can exert tremendous strain on plumbing, windows, and other building components that are not designed to stretch. Moreover, it can be dangerous if jacks are not positioned correctly and the building is not braced.

If there is enough meat left in damaged beams and posts, the rot can be cut out and new pieces spliced in without resorting to heavy jacks. Epoxy, structural screws, metal plates and new pressure-treated material will work wonders.

Unless you're a purist, you don't have to re-create every mortise-and-tenon and dovetail joint in the original frame. All it has to be is structurally sound. If too much of the frame is decayed to allow in-place repairs, you may indeed have to shore up the building with jacks. But I wouldn't begin with that assumption. What's key is to strip back all rot and decay until you're dealing with sound wood. Then repair what's left.

Start with a solid foundation

None of the repairs, of course, will be worth much unless your kitchen sits on a solid foundation. A dry-laid stone foundation is not necessarily unsound. After all, it's held the house up so far. A mortar-less wall can flex and move around slightly, an advantage if the foundation does not extend below the frost line. In such a case, a mortared wall would just crack. If the foundation is not obviously collapsing or sinking, if the walls are still straight, it may be perfectly adequate.

However, adding mortar between stones will help keep moisture and varmints out of the crawlspace beneath the kitchen. That would be a good thing. While you're down there, cover the dirt floor (assuming it's dirt) with heavy polyethylene plastic to keep moisture from migrating up into the house.

Call in a few experts and get their advice

As much as we'd like it otherwise, many houses will need major structural renovations at some point. Not all repairs can be simple. Or cheap. There are a couple of good books that will get you started. One of them is by George Nash called Renovating Old Houses; the other is Renovation (3rd Edition) by Michael Litchfield (both are published by The Taunton Press).

If you feel out of your depth, don't hesitate to invite a restoration carpenter and stone mason over to have a look. Look for people who deal with old houses on a regular basis. It would be worth paying them for a few hours of their time. You're smart not to jump right in with a 20-ton house jack. Take your time, think about your options and know when to ask for help. And ask your wife to hang in there.