I am French-draining around a 1920 sandstone foundation to stop some serious water leaks in the basement. I would like to pressure wash the stone then waterproof it with something. What will seal and stick to sandstone? I have been told to cover the wall with rubber roofing prior to backfilling with pea gravel. Is this a good idea? 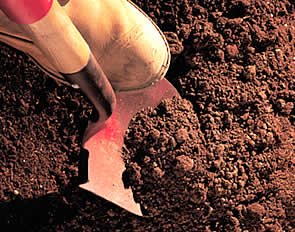 Old stone foundations can be tough to seal. You're absolutely on the right track with tackling the problem from the outside. Digging a trench around the house to expose the foundation is not something every homeowner is willing to do, but any efforts to seal the foundation from the inside are not likely to work nearly as well.

Go to the bottom of the wall, but no farther. For suggestions on your dilemma I called Larry Janesky, the president of a company called Basement Systems. Janesky knows a lot about fixing wet basements. His company does business in the U.S., Canada, and even Europe.

You'll want to expose the full depth of the foundation. However, if the foundation does not rest on a separate footing don't dig below the bottom course of stone. You don't want to undermine the wall. Start by replacing any missing or badly damaged mortar. Lime mortar, rather than cement-based mortar, is your best choice.

Now for the water. Janesky suggests starting with a coat of asphalt damp-proofing. If your foundation was concrete, he'd probably spray on a rubber-based material that does a much better job of sealing cracks. In your case, though, it would take an awful lot of material to fill all the nooks and crannies in a stone foundation. So instead brush on a good coat of damp-proofing to help seal mortar joints.

What will really keep water out of your basement is not the damp-proofing but a special plastic membrane, such as Delta-MS. It's made from high density polyethylene and has a dimpled surface that goes against the foundation wall.

The membrane itself is impervious to water. Should any water get behind it, the dimples create a space so moisture can drain down to the footing drains. Those footing drains are your last step.

Drain water away from the house

In new construction, footing drains are customary. That probably wasn't the case in 1920. Drains are typically perforated 4-in. PVC (some contractors use flexible pipe, others prefer rigid PVC). The pipe is buried in a bed of 3/4-in. stone and protected from an accumulation of silt by filter fabric. Perforations in the pipe pick up water that would otherwise accumulate at the bottom of your foundation wall.

Drain lines should run to daylight. That is, you'll have to give that water a place to go by taking advantage of any slope on your property.

You might also consider gutters if you don't already have them. They help keep water away from the foundation. One other suggestion: add 2 in. of rigid foam insulation (extruded polystyrene would be a good choice) between the foundation and the Delta-MS membrane. It will make the basement warmer and cut your heating bills.

Follow these steps and you should have a dry basement. It's a lot of work. Then again, so is dealing with a wet basement every time it rains.