Our condo units are being re-sided. When the contractor removed the old siding from our townhouse he also ripped out pieces of the sheathing. In the normally dark attic the holes were obvious. But you can't tell from standing inside the house on the first and second floors whether there also was damage to sheathing there. We insisted the contractor fix the holes we knew about (there were six, ranging in size from 2 in. to 15 in. square). Our managing agent assures us the green plastic lining that will go under the new siding as well as the siding itself will be sufficient protection. My gut tells me that isn't good enough. Am I being unreasonable or too finicky? 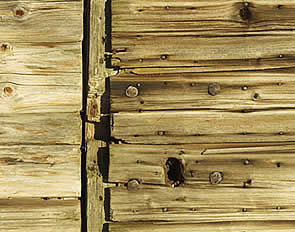 Sheathing, which is typically ½ in. thick plywood or oriented strand board, serves an important structural purpose. It prevents a building from "racking." Think of a cardboard box. When you cut the tape that keeps the bottom closed, the box easily folds flat. That's what the sheathing is doing. It prevents the walls of your town house from moving. It also provides a solid base for attaching the siding. But sheathing has only a minimal role as a weather barrier.

Old houses sometimes had no sheathing at all

My wife and I once owned a farmhouse in Connecticut that was probably built around 1820. It was of post-and-beam construction. When I ripped off the old siding to replace it, I discovered the original builders had never installed any sheathing whatsoever on the outside of the frame. None. But it didn't matter. The timber frame was very rigid so sheathing wasn't really necessary.

On new houses, which are usually framed with 2x4 or 2x6 dimensional lumber, builders sometimes skip the sheathing in favor of metal or wood diagonal bracing. I don't know how common this practice is, but it is done. So there are circumstances in which sheathing can be eliminated entirely without compromising the strength of the building.

Assuming the rest of the building is sound, and that the sheathing was installed correctly to begin with, a few holes here and there should not have much of an effect structurally. Weather protection is provided first by the siding and then by a layer of housewrap or tarpaper beneath it.

But why should there be holes in the sheathing?

Both OSB and plywood are pretty tough materials. So it's not exactly clear why the contractor should have pulled chunks of it off as he removed the siding. Siding is usually held on by relatively light gauge nails. Pulling them out of sound sheathing should do no damage to the sheathing itself other than leaving a small hole. What you describe would make more sense if the sheathing showed signs of water damage or decay.

You might take another trip to the attic and look carefully at the back side of the exposed sheathing. Take an ice pick and probe any spot that looks funny. Sound wood won't permit the tip of the ice pick to advance very far. If you can push the ice pick through the sheathing, you can call the managing agent and tell him, "Houston, we have a problem."

But let's assume for the moment that you don't find anything amiss and can chalk up the holes to a few over-exercised laborers with big pry bars. If that's the case, a few holes in the sheathing shouldn't make any real difference in how weather tight your house is.