We own a home that has 2 front doors, very close together and both open onto the front porch.  The home is in south-central PA and was built around 1850.  There are many other homes in the area that also have the 2 doors.  Do you know what the purpose was?  I'm quite sure it was never a duplex.

I've inspected many homes that have two front doors and also show no evidence of ever housing two families. I've also had many homeowners and real estate agents state with conviction that they knew the true reason:

•    One is the "in" door and the other is "out"
•    Families were huge and two exits were needed in case of a fire or urgent outhouse visit
•    Extra ventilation – people didn't bathe and cooking over an open fire stinks
•    One door was for the residence and the other was for an in-home occupation
•    When the second generation came of age, the home was always shared
•    The second door was for servants
•    The home was built in two separate sections
•    Furniture pieces were huge at that time – to move in or replace pieces required individual access from the exterior
•    Times were hard.  Families rented a room to railroad workers or boarded itinerant laborers at harvest time
•    Churches and meetinghouses at that time had separate entrances for men and women.  This tradition was also carried on at home or the home was used for worship services
•    One of the doors was only used for funerals
•    One of the doors was only used for the groom to carry the bride over the threshold

All the above usually peg the meter on my folklore detector. I always do research to confirm the readings on testing equipment and have found the likely reason for two front entrance doors has relatively little to do with how things might have been "back in the day." 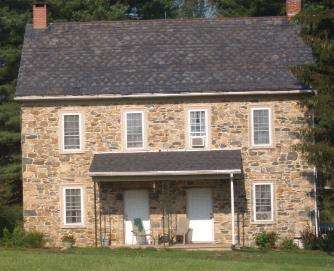 Some stories told and written about the use of the two doors have some credibility. These involve using one door for daily, domestic use while reserving the other for formal functions and receiving guests.  One door usually opens into the "keeping room," where cooking and other domestic functions occurred, and the other opens to a more formal parlor. There was one older man, selling the farmhouse that had been in the family for generations, who explained how the family always used only the door nearest the barn for daily activities. When wearing their best for Sunday services, they would enter and exit through the other door.

While the separate uses of the two doors is plausible, I don't feel it's enough to drive a significant architectural trend.

The Style of the Time

In my experience, the twin door house first appeared mostly in the Pennsylvania and New Jersey areas with some random examples scattered in the other middle colonies. These homes were built mainly during the time that the Georgian style was most popular. The Georgian style is known for its visual balance, which requires strict symmetry, particularly in the placement of windows on the facade. Many true Georgian style homes have a central entrance, flanked with even rows of windows. This requires a center hall in the middle of the home, dividing the two primary first floor rooms. 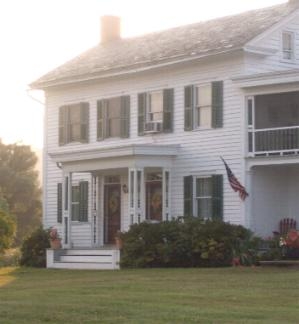 Many of the early communities in the middle colonies were established by settlers from different countries and unique religious beliefs. Some of these groups' beliefs had a common trait – an emphasis on simplicity. With this view, combined with creating a shelter in a new land with little time to waste, the center hall might seem more presumptuous than practical. Without the division of a center hall, the front entry placement would have to be off-center and enter only one of the primary, ground level rooms.  Creation of a second, identical entrance resolved the issue of imbalance.

Some historians suggest the origin and use of double entry doors is exclusively Pennsylvania German and was only for the period of 1800 to 1870. While it is found in many PA German farmhouses during that period, my experience has shown the style was also used in other areas by other ethnic groups. I've found several 18th century Dutch homes in New Jersey as well as many 18th and 19th century English homes in Quaker communities of PA and NJ that have this same modified Georgian detail. I will concede that it is likely that the PA Germans are mostly responsible for this style spreading to the West and South in the late 19th century.  I've been told there are even some examples in Canada, at farms suspected of being built by relocated Germans from Pennsylvania.

Now in the 21st century, I find some of the second doors have been removed and the openings closed-in or converted to a window. In others, to increase extra wall space, owners have disabled one of the doors by placing large furniture pieces in front of it. If my house had two front doors, I think my wife would be pleased if the kids and I used one door and she received guests at the other.