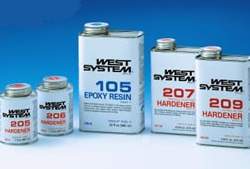 Reviewed by:
Rosemary Thornton
West System two-part epoxy is more difficult to use and more expensive than most other adhesives, but it is also more versatile. It forms a strong, waterproof bond between a variety of materials and can be used to rebuild damaged building components, such as door and window frames, columns and beams.

Open and curing times are relatively long, but cure times can be manipulated by heat or by using one of several hardeners. The epoxy also can be thickened. Mixing ratios are crucial, so West System offers metered pumps that deliver hardener and resin in precise proportions. It's a good idea to wear gloves when handling epoxy.