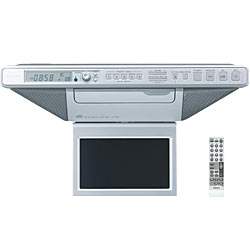 Reviewed by:
Rosemary Thornton
Now the cook can bake her cake and watch TV too -- without sacrificing counter space. From Sony, the super-slim 7" Dream Machine wide-screen color LCD television stows neatly away under the cabinet when not in use.

Sony also managed to pack a CD player, AM-FM radio and cooking timer into the petite ICF-CD555TV under-counter television. The television can recieve 125 cable stations as well as VHF/UHF channels 2 - 69. A magnetic remote control is included. Price from Sony is $399 (October 2004).