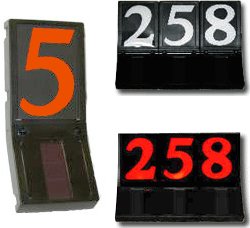 Reviewed by:
Rosemary Thornton
Emergency responders, visitors and even the pizza delivery guy can appreciate these large display numbers. That's especially true at night a photocell that soaks up the sun by day makes the numbers glow in the dark.

Another photocell automatically turns on the numbers at dusk. Numbers appear white during the day and red at night.

According to the manufacturer, the numbers are visible from 100' or more and can be attached to any vertical surface (fastening hardware not included).