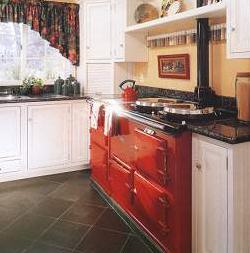 Reviewed by:
The Old House Web
British manufacturer AGA makes the claim that "no otherrange looks or cooks" like its cast-iron, gas-fueled, enamel-glazed four burner stove. Hand-built AGA cookers use a constant source of fuel to maintain an inner temperature, making them ready to do anything from boil water to bake a turkey at a moment's notice. The AGA Cooker is available in eight standard colors and four premium shades from British Racing Green to Wedgwood Blue.

The four-oven AGA is suggested for large households or for those who like to entertain. It offers two large roaster/baking ovens, a simmering oven, and a warming oven. It holds up to six large saucepans on the boiling and simmering Plates. In addition, it has a large warming/serving Plate.