Linoleum: It's Back! Linoleum 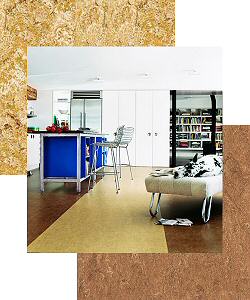 Reviewed by:
The Old House Web
Linoleum, the last word in kitchen flooring for nearly a century, is back again. The all natural flooring -- derived from linseed oil, cork, resins and other natural material and bound onto a jute backing -- was invented in England in 1863 as sanitary and durable kitchen floor. But the cost of that shiny surface was frequent waxing, and the material gradually fell out of favor, being replaced largely by vinyl flooring by the 1970s. Armstrong, the last American manufacturer, made its last roll of linoleum in 1974.

Now, thanks in part to an interest in restoring homes from the early- to mid-20th century, linoleum, under the trademarked name Marmorette is being produced by Armstrong. You won't find the floral patterns, teals and pinks that marked earlier periods, however. Marmorette comes in 58 largely earth tones, like the floor pictured. Colors include "Bamboo Tan" and "Oak Brown." The flooring is available only in sheets. One benefit of linoleum could not have been anticipated by its inventor -- it has an anti-static that makes it ideal for rooms with electronic devices.

Marmorette starts at about 80 cents per square foot. Professional installation is required, and the floor is not recommended for bathrooms or below-grade floors. (January 2005).