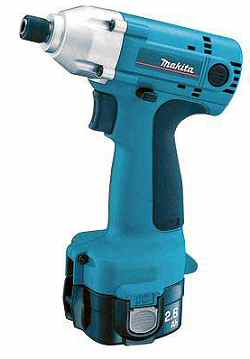 In addition to the rotating force of a conventional drill, the impact driver also delivers a series of rapid blows that help to power in fasteners. The variable-speed, reversible Model 6916 DWDE cordless uses nickel-metal hydride batteries, which do not have to be recycled. Its only 6-5/8" long, making it easy to get in tight spots. Weighing only 3.3 pounds, it develops 887 in.-lb. of torque far more than conventional cordless drill/drivers. This impact driver sold for $230 in September 2004.