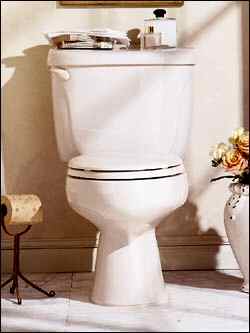 Reviewed by:
Rosemary Thornton
A rather indelicate problem leaves many homeowners reluctant to give up their old faithful water-guzzling toilets for the new 1.6 gallon flushes. Many folks complain that the replacement toilets just don't do the job that the old high-water flushes did.

Sloan Valve Company thinks it might have the solution in its Flushmate. Using a specially designed bowl and compressed air -- instead of gravity -- the device effects a strong, complete flushing action.

The self-contained Flushmate tank sits within the toilet tank, eliminating sweating. A minimum of 20 psi water pressure is required for Flushmate to work effectively.

The Flushmate is available in a number of toilet models from major manufacturers, including the Cadet round front toilet from American Standard (pictured).