Reviewed by:
The Old House Web 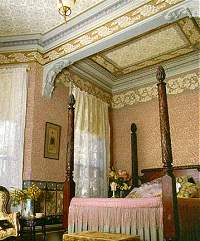 The 19th century might be rightly considered the Golden Age of wallpaper. Bradbury & Bradbury's Victorian Wallpaper Collection is focused on the most original and influential designers of the period, and the styles in which they worked.

This bedroom is based on a combination of William Morris wallpaper and stencil designs. The dado (wainscot) is inspired by early Morris & Co. work in the Green Room of the Victoria and Albert Museum. The wallpaper, "Walden," is an adaptation of Morris' "Willow Boughs." The central ceiling paper, "Kensington Ceiling," is also a Morris pattern, and is surrounded by borders and blocks taken from stencil treatments. All patterns are from the Morris Tradition chapter of the company's catalog.