By The Old House Web 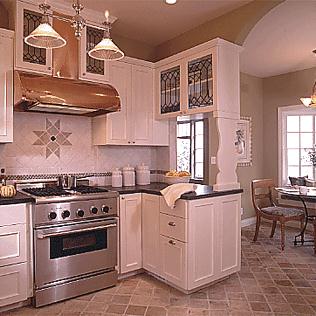 A makeover during the 1970s in this historic Tudor home had left this kitchen with an out-of-date look and a number of other flaws.

The new crisp kitchen blends modern convenience with traditional charm in a limited amount of space. By closing a door leading to the basement, the designer was able to wrap cabinetry around the room.

Peninsulas built out from both sides of the kitchen add much needed counter and storage space near the range and built-in refrigerator, where an impractical oversized pantry had been previously.

Double-sided leaded glass cabinets let light shine through, while maintaining the open feeling between the kitchen and breakfast room. A heat register that had been located in the main pathway between the two spaces was moved under a base cabinet. With the addition of a large bay window, the breakfast room is now filled with natural light and a scenic view of the city and mountains.

Perhaps the most striking part of the kitchen, the cooking area includes a commercial range and gleaming custom copper hood.

Interesting leaded glass cabinet doors and a rustic geometric design behind the range fit the kitchen's dressy design. The microwave oven was strategically built into a base cabinet to keep the counters clutter-free.

This kitchen earned a first-place award in the National Kitchen and Bath Association's 1998 Design Competition.