When walking into a room where someone has obviously given a lot a thought to the  interior design, it always amazes me that when I look up, there’s a good chance the ceiling is just a white expanse. The walls might have chair rail, wall paper, or intricate wainscoting and the floor could be a beautiful hardwood, but when my eyes wander to the ceiling, there’s only what seems to be acres of uninteresting sheetrock or plaster.

I know that some designers believe that white or off-white ceilings can make rooms feel larger. The same school of thought would have you placing mirrors on the walls to create the illusion of space. However, having been around old houses much of my life, to me the ceiling is a wall surface that can be used as the focal point of a room — it can even be a major component in defining the space’s character. 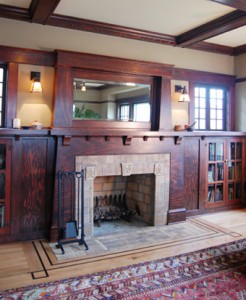 I’m preparing to renovate a few rooms in my home and one of the ceiling treatments receiving strong consideration is an old house favorite: box beams. Just as the name sounds, this is a series of real or job-site constructed beams that are installed to divide a ceiling into squares or rectangles. The beams can be as deep or shallow as you like, they can be given a formal or casual finish, and the boxes themselves can be any dimension.

One of the things I like most about box beam ceilings is that they’re fairly DIY friendly — a major consideration for someone with my limited carpentry abilities. The difficult part is coming up with a layout that fits the room and after that it’s pretty smooth sailing — just a little cutting and nailing.

Perhaps no other ceiling treatment can completely transform a room like tin ceiling tiles and they fit in with the interior decor of just about any old house. Many old Victorian homes have tin ceilings because their builders hoped to duplicate the look of the plaster ceilings that were so popular in Europe at the time. Tin could add the high definition of plaster at a fraction of the cost and installation took much less time.

It’s possible to find authentic tin ceiling tiles that have been removed from old houses and building, but a better choice might be from one of the many companies that now make replica tiles in many of the original designs. The tiles are simply nailed to the ceiling just as they were in the old days, but most manufacturers recommend that a layer of plywood be installed first to act as a suitable nailing surface.

I know there will always be those who prefer a smooth white surface, but in my school of old house interior design, there’s nothing like a ceiling that can add a touch of character to the room.