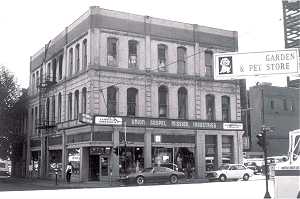 This three-story building is part of a historic district noted for late-19th centurycommercial buildings. It is prominently located on a corner site and flanked by two-storystructures. Built in 1890, the structure has remained unchanged in appearance for ninetyyears. Its most distinctive historic features include jack-arched windows, a corbelledbeltcourse, and pilasters. The building was in poor condition over a period of time,having lost an ornamental projecting entablature in the 1950s and suffering fire damage onthe third floor of the interior.

In the rehabilitation for mixed retail and residential use, the workincluded a 1 1/2 story addition to accommodate eight loft bedroom apartment units over theretail and office space. The new addition was designed to be flush with the existingfacade in order to maximize the floor space (see photo). 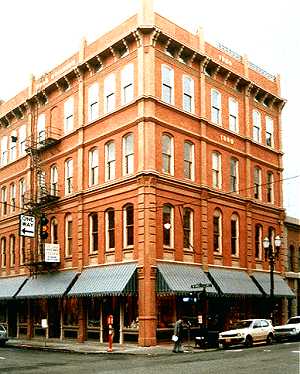 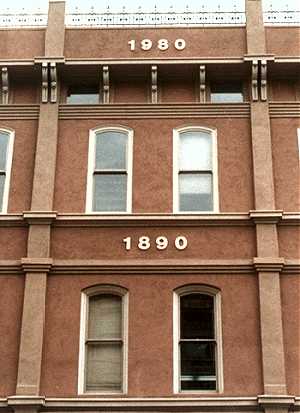 To further blend in with the historic district, the owner decided to use acornice with brackets similar to the lost cornice--the spacing of the brackets wasmodified to include small modern windows. Dates were added to the facade to differentiatethe historic construction from the new addition (see photo). As a result of the new work,the height of the building had now been increased by almost one-third, giving it a newvertical emphasis it never had historically.

The historicizing of the addition's detailing (jack-arch windows,corbelled beltcourse, pilasters, brackets, and wrought iron cresting) eliminated anyvisual distinction between the new addition and the historic building. Adding dates (1890and 1980) as a device did not, in and of itself, distinguish old from new. In brief, theaddition had significantly altered the the building's mass, scale and proportionalrelationships and changed its character. In spite of the fact that work on the first twofloors was considered appropriate, the overall rehabilitation did not meet Standards 2 and9.

Rooftop additions are sometimes seen as a way of increasing the usablefloor area of historic buildings located in urban areas. When this type of new addition isbeing considered, it needs to be designed in a way that it is as inconspicious as possiblewhen viewed from the street. Even if the new addition is set back from the plane of thefacade, making it inconpicuous is difficult on a two or three story building. For thisreason, rooftop additions are generally not recommended.

Standard 9:New additions, exterior alterations, or related newconstruction shall not destroy historic materials that characterize the property. The newwork shall be differentiated from the old and shall be compatible with the massing, size,scale, and architectural features to protect the historic integrity of the property andits environment.